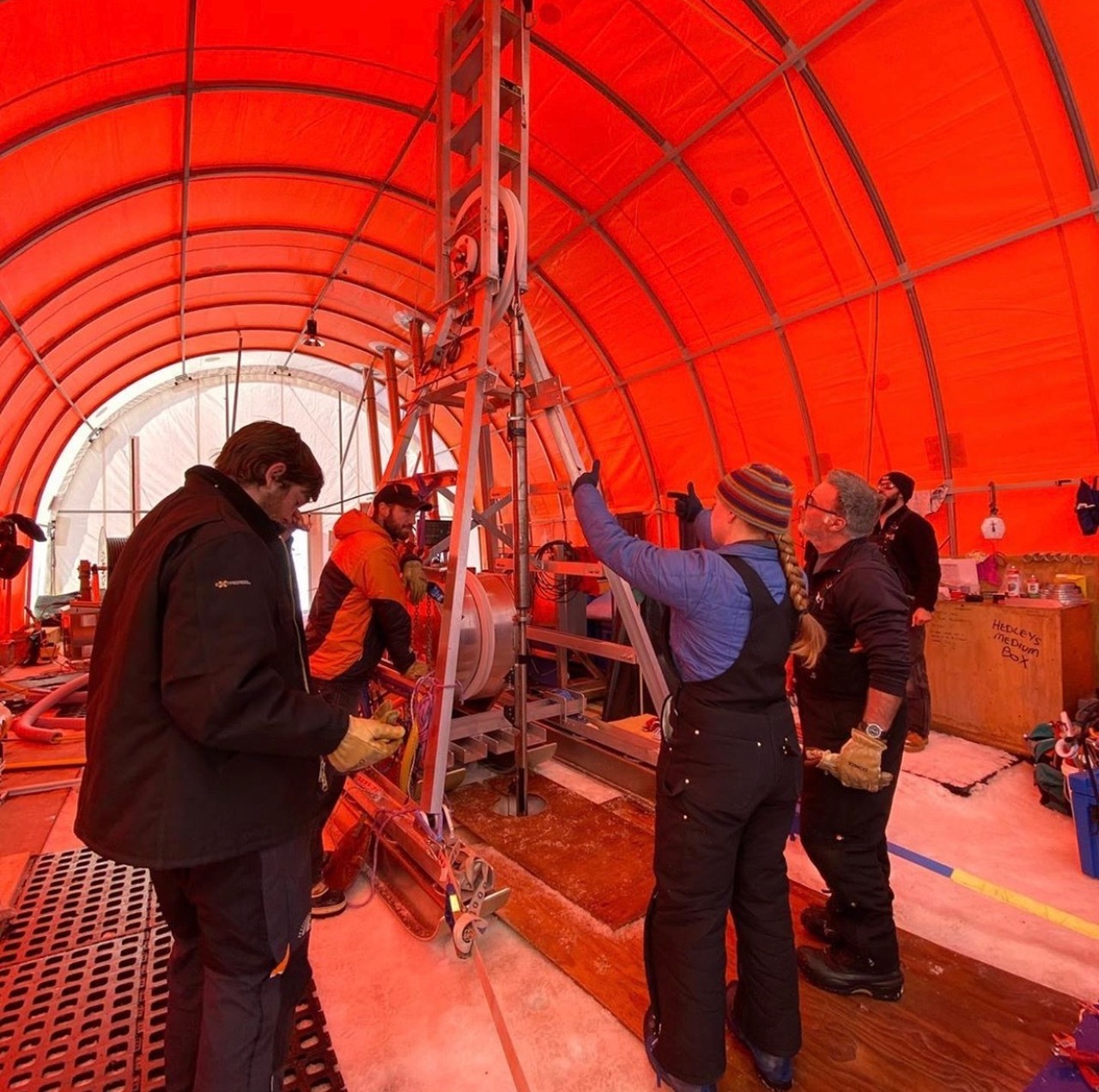 This summer, nearly one thousand kilometres from Scott Base across the world’s largest ice shelf, a team of Kiwi researchers plunged to new depths.

The team used hot water to drill 600 metres though the Ross Ice Shelf, at an area known as the Siple Coast.

This is a major milestone for researchers working to understand how the ice shelf will respond in a warming world, and in turn how Antarctica contributes to global sea level rise.

“Up until now we’ve only seen through this huge ice shelf in a few spots, and only once at the coast. It’s been like having a whole coastline to explore and only ever going to one beach.

“We’ve now got a 3D view of what’s going on, from the top of the ice, through the ice, in the ocean cavity and in the sediments beneath.

“We didn’t just drill down and take a quick look, we’ve installed an ocean mooring in the cavity which will inspect the area for years to come. We’ve taken samples and laid the ground work for numerous research seasons ahead,” he says.

The area is the grounding line of the West Antarctic Ice Sheet, where the ice meets the ocean and starts to float, becoming the Ross Ice Shelf.

NIWA Principal Scientist in Marine Physics, Dr Craig Stevens says it’s as far south as you can get in the ocean.

“This is where the seawater first meets the ice as it leaves the coast and the fingerprint of the ice-ocean interaction leaves a lasting impression on the entire ice shelf,” he says.

University of Otago Professor Christina Hulbe says the grounding line is an area of extreme importance for understanding how ice flows into the ocean and what happens to it once it does.

“It’s a complicated system, from snow falling at the surface to what’s happening in the mud on the seafloor.

“Step by step we are linking together different kinds of science, different ways of looking at this important and nearly unexplored part of the Earth system,” she says.

Antarctica New Zealand’s Acting Chief Scientific Advisor Dr Fiona Shanhun says this season’s sampling at the Siple Coast is an important step in developing a better understanding of how Antarctica’s ice behaved during past warm periods in Earth’s history.

“New Zealand researchers are working to detect, attribute and project changes in Antarctic systems in order to better equip New Zealanders to mitigate and adapt to future change. This research fills a critical knowledge gap,” she says.

This research was funded by NZARI and the New Zealand Antarctic Science Platform, and is a collaboration between experts from Victoria University of Wellington, NIWA, GNS Science, the University of Otago and University of Canterbury.

In 2018 MBIE contracted Antarctica New Zealand to host the Antarctic Science Platform. The Platform aims to conduct excellent science to understand Antarctica’s impact on the global earth system. The investment is for $49 million over seven years through the Strategic Science Investment Fund.