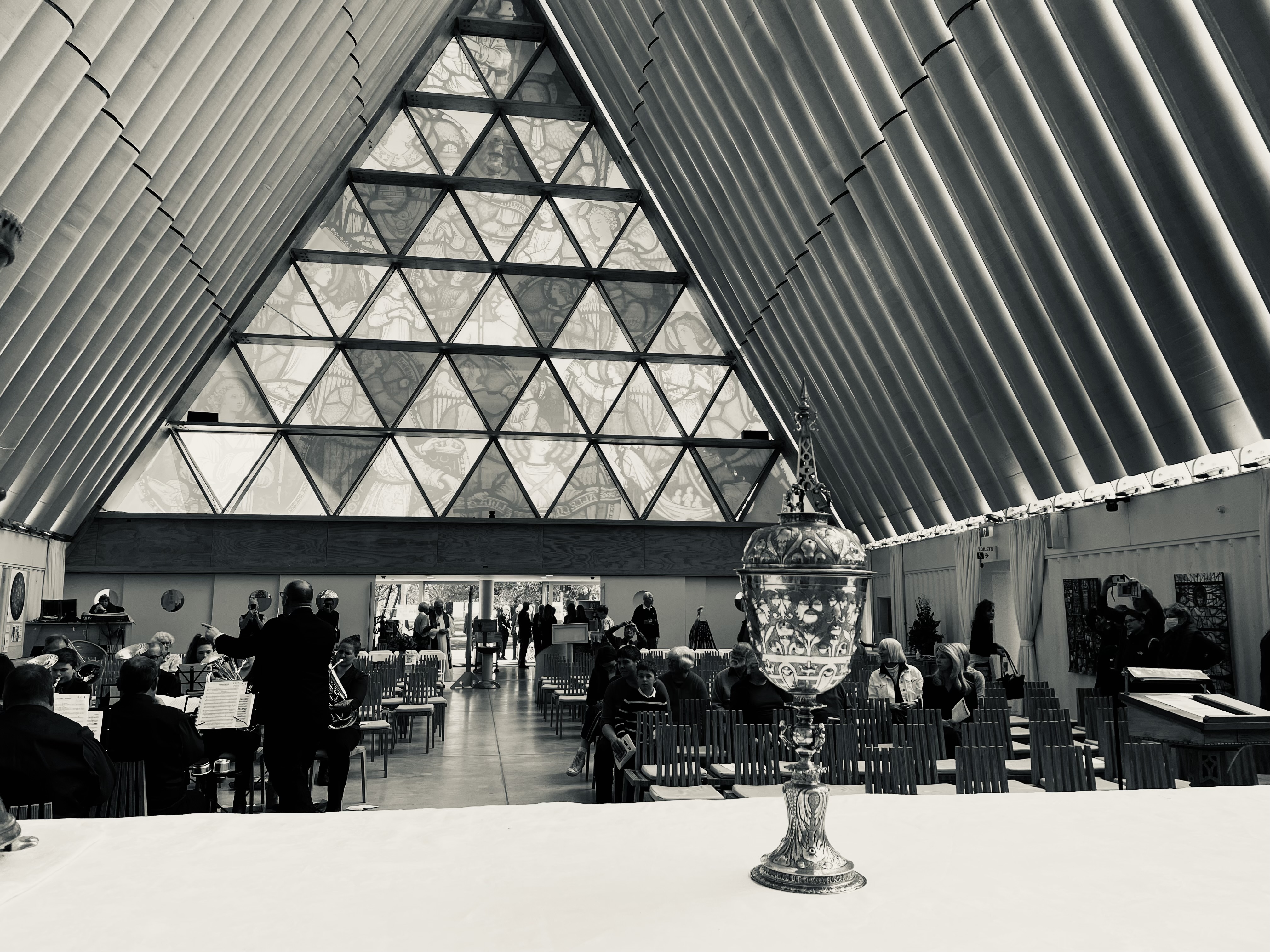 The Erebus Chalice has begun its journey to Antarctica. After looking after it over winter, Christ Church Cathedral gave it to Tony German from the National Science Foundation, at a service in Christchurch on Sunday. The silver and gilt chalice will now travel to Chapel of the Snows at McMurdo Station for the summer, a tradition that has continued for 35 years. Rev Hugh Bowron, Acting Dean, remembered those who have given their lives for exploration and science, and asked for God’s blessing on everyone heading south: “May all that takes place in Antarctica this year and the time to come respect the beauty, the mystery and fragility of God's creation. Make us, we pray, good stewards of the earth and sea, and good neighbours gathered from several nations.”

Antarctic scientist, Prof Tim Naish, took to the pulpit to give an address about climate change. The Antarctic ice sheets are melting, which could put nearly a billion people at risk from coastal flooding as seas rise. There is urgency to reduce the carbon emissions which are heating the planet. His was also a message of hope: There is time to avert suffering, if we act now.

The exact origins of the Erebus Chalice are a mystery, according to short history provided to service-goers. It was given, in 1987 by Miss Betty Bird to commemorate the 75th anniversary of Robert Falcon Scott’s visit and death at the South Pole in 1912. There is legend, untrue, that the chalice accompanied Miss Bird’s great-great uncle, then Lt Joseph Bird, on Sir James Clark Ross’ 1839 expedition. Made in about 1910, is more likely that the chalice has an association with Scott’s expedition.

Antarctica New Zealand’s Megan Nicholl read In Search of a Sentinel by Alina Siegfried, which is re-printed here (thank you so many people for asking!)

In Search of a Sentinel

A bag of onions sits in the corner

As if the men walked out

Halfway through breakfast one day

And never did return

Up on the hill a cross stands sentinel

Over the endeavours of our time

The day I step inside,

It is one hundred years old

I half expect to see Sleeping Beauty

emerging from the semi-darkness

Waking after all this time to find the world much changed

But all is quiet on the point

The bones of a husky lie

In a windswept, ephemeral grave

To the bitter end, still chained

To the Sleeping Beauty inside

sprawled out across a desk, she lies,

An Emperor Penguin, her frozen kingdom

Oblivious to the slipping by of time

Whiskey beneath the floorboards

Laundry still on the lines

And if you look close enough

You can make out Shackleton’s signature

Scrawled across a packing crate

It has been 17 years since I stepped inside,

A teenage lifetime ago

And I wonder, does the husky still stand sentinel

Does Sleeping Beauty yet slumber?

In the shadow of Erebus upon Pegasus airfield,

stepped out to find herself

Blasted with the overwhelming reality

With that single step,

a seed of passion, thoroughly planted

A challenge laid to do my part

My gift is my story

So how does this one contend

With a continent that is full of them?

Who are the ones who will watch over the ice

As the world about us rapidly changes?

Look to the South in search of a sentinel

For it is the climate scientist,

Who reveals a new story

From every inch of ice core

It is the hydrologist monitoring the meltwater

Beneath the Helliwell Hills

It is the soil expert, treading lightly

Across the fragile Dry Valley floors

Meticulously careful not to leave

A single footprint in perpetuity

It is the captain navigating stormy seas

As the toothfish lurks below

It is the weather watchers, the penguin counters

The pilots and the heritage experts

who see that the husky and Sleeping Beauty

Will forever stay as they lay

It is the lone figure

In quiet reflection in the chapel at McMurdo

Our Lady of the Snows

And in the chapel of nature’s grandeur

It is the photographer, lying in waiting

For the towering ice shelf to calve

Stealing and sealing in time

A single moment that has the power

to take our breath away

When I feel the icy blast of a Wellington Southerly

These bones, they remember

When I turn to face the bottom of the world

This flesh, it cannot forget

Taking me to a time and a place

Where the sun does not set,

A place where standing sentinel

In the golden lowlight of 3am

The silence is so complete

You can hear the blood coursing through your veins.