Home › Latest Updates › We need you to Colour Our Place, Scott Base!

We need you to Colour Our Place, Scott Base! 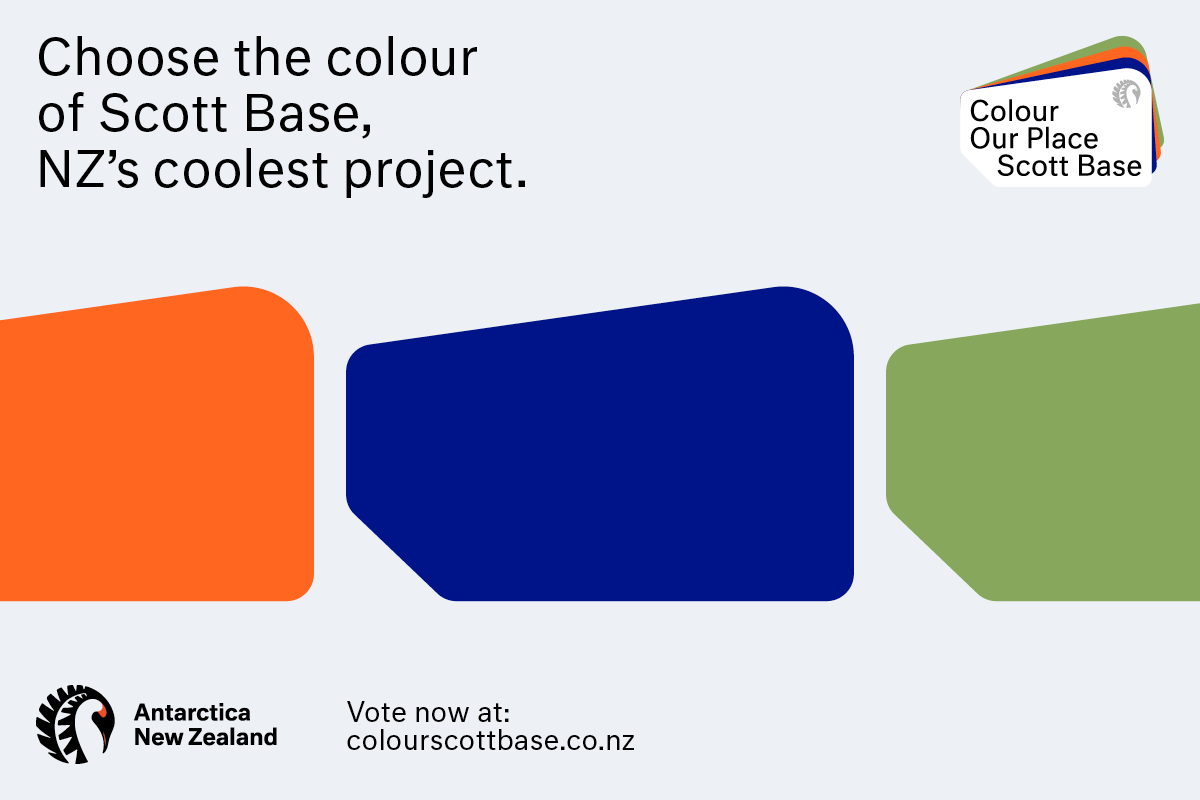 Scott Base is Aotearoa New Zealand's place in Antarctica.

From Sir Edmund Hillary's dash to the South Pole by tractor to the excellence of New Zealand Antarctic science, Kiwis have a long history of exploration and research on the continent and at Scott Base. Now, we want New Zealanders to feel even more connected to our home on the ice and choose what colour it should be.

The Scott Base Redevelopment will see the current, aging buildings replaced with a fit-for-purpose base powered by 97% renewable energy, which means we can keep supporting science for another 50+ years.

Everyone in New Zealand can vote by going to colourscottbase.co.nz

What will it be - kikorangi, karaka or kākāriki?

There are three choices – blue, orange or green.

“You would be forgiven if you thought that Antarctica is simply white. While snow and ice cover the continent, there is a rich palette of colour if you know where to look - connections to land, sky and water really stand out. With so many wonderful colours available, we needed to be practical, so we have worked with our architect, Hugh Broughton, to narrow down the choices.

“People can choose between the blue of the glaciers, the green of the Southern Aurora, or orange like the cheeks of emperor penguins. Having seen and experienced all of these colours, I know they are inspired choices.

“I’m personally in favour of orange because of its historic connection to the 1957 Trans Antarctic Expedition, but now it’s up to Kiwis to decide.”

Antarctica New Zealand chief executive Sarah Williamson says Scott Base has had a special place in our history ever since Sir Edmund Hillary and his team built the first of its buildings on Ross Island in 1957. The original base was a mixture of orange, red and yellow. In 1965 the base was re-painted green, to remind people of New Zealand.

“Helping us choose the colour is a way to feel connected to our Antarctic legacy, understand the important science that happens at Scott Base, and to shape the next chapter of its history.

“As we’ve seen with the recent sea level rise projections, what happens in Antarctica affects us here. It influences our atmosphere, oceans, weather patterns and temperatures.

“Our scientists are working to understand how emissions from fossil fuels will change Antarctica and our climate. Scott Base is critical to supporting that work.

“New Zealanders have always been great supporters of Scott Base, they even held bake sales and other fundraisers to get Sir Ed and his team to the ice. Kiwis have been at the base every day and every night since then. It’s the home-away-from-home for our explorers and scientists.”

Voting closes midnight 14 June 2022. Each person gets one vote. The public’s also being asked to share a video of their chosen colour (and why) on Antarctica New Zealand’s social media platforms.